With a turnover of $567.3 billion, Asia-Pacific is the largest e-commerce region in the world 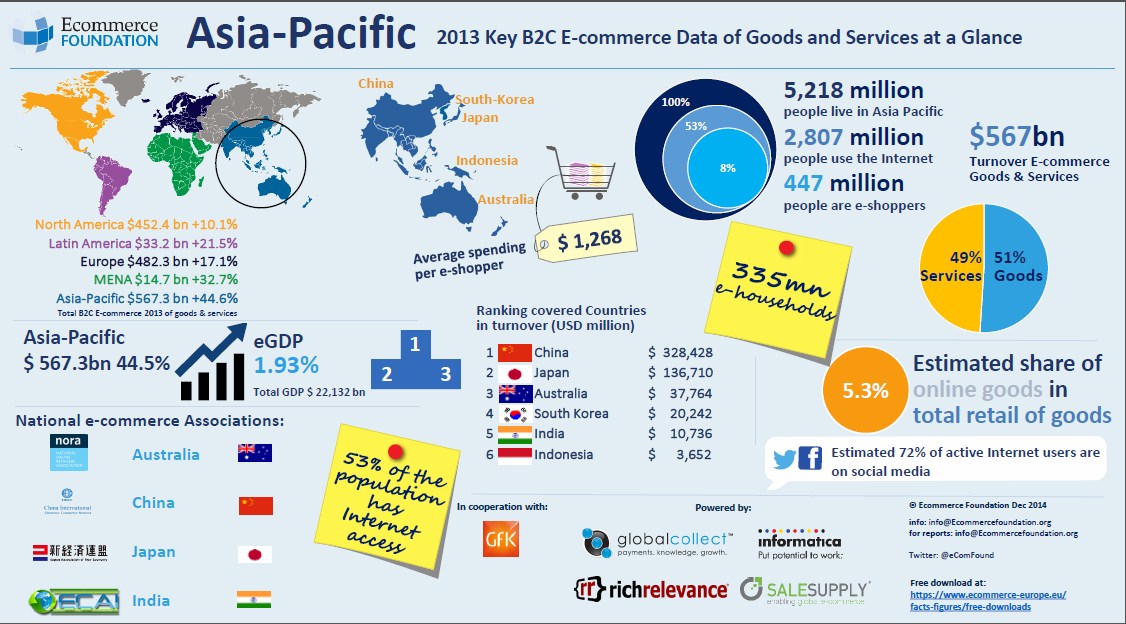 With a total B2C e-commerce turnover of $567.3bn in 2013, Asia-Pacific was the strongest e-commerce region in the world in 2013, as it surpassed Europe ($482.3bn) and North America ($452.4bn). In comparison with 2012, the Asian-Pacific B2C e-commerce turnover grew by 44.6%, which was the highest growth rate of all the regions. This position and growth is largely due to the emergence of China, which has really established itself as a powerful e-commerce market, concludes Ecommerce Europe in its latest report.

Figures in the Ecommerce Foundation reports are based on the Global Online Measurement Standard for E-commerce (GOMSEC). The European e-commerce figures were established in cooperation with national e-commerce associations and GfK.

Online sales in Asia-Pacific expected to have reached $799.2 billion in 2014
The Asian-Pacific region, including Australia, China, India, Indonesia, Japan and South Korea, made up 36.6% of the global B2C e-commerce market in 2013, which represents an increase of more than five percentage points. For 2014, Latin America’s online sales are estimated to have reached $799.2 billion, which means that it will have taken up a market share of no less than 41.8%.

In terms of B2C e-commerce turnover, Japan ($136.7 billion) ranked second, followed by Australia ($35.7 billion), South Korea ($20.2 billion) and India ($10.7 billion). With B2C e-commerce sales of $3.6 billion, Indonesia is the smallest market of the region. On the other hand, it is also the fastest-growing market. In 2013, Indonesian B2C e-commerce doubled its turnover, resulting in an astonishing growth rate of 100%.

Ecommerce Europe’s research reveals that 235.7 million consumers in Asia-Pacific bought goods and services online in 2013. On average, Asian-Pacific online consumers each spent $1,268 online in 2013. This is slightly lower than the global average of $1,304. At $2,167, Australian e-shoppers were the biggest spenders online, followed by the Japanese ($1,808) and China ($1,087).

In terms of Internet penetration, the Latin American average of 53.8% in 2013 was lower than the global average (64.0%). Within the region, Japan was in the lead with 86.3% of its population being connected to the Internet. South Korea ranked second with 84.8%, followed by Australia with 83.0%. It is interesting to see that China only had an Internet penetration of 45.8% and that in India only 15.1% of the population was connected to the Internet. These rates are expected to rise in the near future, which will have a positive influence on their B2C e-commerce sales.

In addition to this Asian-Pacific B2C E-commerce Report and the previously published Global, North America and Latin American B2C E-commerce Reports, the Ecommerce Foundation will publish two other regional reports in the upcoming period. These will cover the Middle East and North Africa (MENA) and the major emerging countries Brazil, Russia, India, China and South Africa (BRICS). All reports are powered by GlobalCollect, Informatica, RichRelevance and Salesupply.

You can download a free light version of the Asia-Pacific B2C E-commerce Report here.